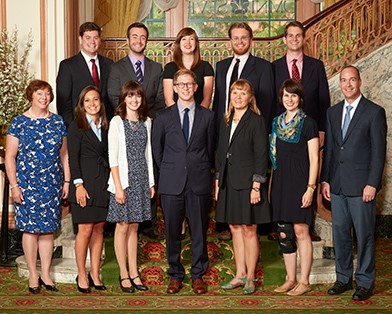 Nicholas P. Andersen is a PhD candidate in the Department of Religious Studies at Brown University. He specializes in Black religious thought, philosophy of religion, and religious ethics. In particular, his work examines the ways certain nineteenth- and twentieth-century Black thinkers appealed to religious resources as they fashioned ideas about African redemption and the destiny of the Black race. His dissertation, “‘Ethiopia Shall Soon Stretch Forth Her Hands unto God:’ Ethiopianism, Conjure, and Repatriation in Black Religious Thought,” offers a revisionist interpretation of the Ethiopianist tradition’s moral vocabulary that foregrounds its Africana dimensions. Nicholas holds a BA in Religious Studies and an MDiv from Westmont College and Duke Divinity School, respectively.

Bruno Cassarà is a PhD candidate in philosophy at Fordham University. He specializes in phenomenology and hermeneutics, particularly in the philosophies of Husserl and Heidegger. His research focuses on the theme of desire, as well as on questions of phenomenological method and limit experiences. His dissertation gives a phenomenological and hermeneutic account of the fundamental desiring structure that motivates all human praxis. Bruno has taught courses on the philosophy of human nature and philosophical ethics, and has a BA from Fordham University in philosophy and comparative literature (2015, summa cum laude, in cursu honorum). Bruno lives in New York with his wife and is an avid coffee drinker.

Sam Hahn received his MA in Classics from the University of Colorado Boulder after completing his undergraduate degree at Samford University. Upon exiting academia, he entered the nonprofit sector where he serves as a Program Coordinator for the Chef Ann Foundation. In his current role, Sam supports school food professionals by assisting in their schools' transition to scratch cooking, providing them opportunities for career development, and advocating for policy changes at the national level. He sees his work around school food as an important part of creating a sustainable food system.

S. Kyle Johnson is a PhD candidate in Theology at Boston College, where he explores the intersections between political theology and spirituality. His dissertation argues that Christian traditions regarding demons and evil spirits have helped produce the demonizing social imaginaries of colonialism and anti-Black racism. Kyle considers practices of spiritual discernment in Black American religion, particularly in the literature of James Baldwin, as a decolonial account of witness against "the powers and principalities." Kyle is also a passionate educator with an interdisciplinary teaching repertoire in theology, religious studies, and political theory. Kyle received his BA from Houghton College in 2012 (summa cum laude), a MDiv from Gordon-Conwell Theological Seminary in 2015, and a MTh at Boston College School of Theology and Ministry in 2016. He lives with his wife in the Boston area.

Micaela Kowalski is a PhD candidate in History at the University of Virginia. She studies early modern global history, with an emphasis on European visual and print culture. Her dissertation investigates the role of religion in the depictions of “new worlds” encountered by Europeans in the period, and argues that visual models of religious difference, revitalized by the religious reformations in the sixteenth century, were the most important tropes for translating and understanding these new worlds abroad. Micaela has been a teaching assistant at UVa for six semesters, teaching courses in early modern history, early Christianity, global studies, and precolonial Africa. Micaela holds her BA in History (summa cum laude, 2016) from Mount St. Mary’s University in Emmitsburg Maryland, and her MA from UVa in Early Modern History and Visual Studies (2018). Micaela currently lives in Arlington Virginia and enjoys weekends journeying into Washington DC.

Sarah Neitz is a PhD candidate in Sociology at the University of Notre Dame. She is a political and cultural sociologist, studying the politicization of artworks. Her current project looks at political polarization in bluegrass communities, using embodied ethnographic methods like learning the mandolin to participate in bluegrass jams. She is a big fan of social theory, with a particular interest in contemporary pragmatist theorizing. Her dissertation makes a contribution to theories of action and creativity in sociology, interpreting John Dewey’s underutilized aesthetic theory to connect art and political action in cultural spheres. Sarah has taught courses in Sociological Theory and community-based learning courses on the Catholic Social Tradition. She has a B.S. in International Studies, Hispanic Studies, and Philosophy from the University of Scranton and an MA in Political Science from the University of Toronto. She resides in Frederick, Maryland with her husband and Rooster the basset hound.

Emily O’Brock is a PhD candidate in French at New York University. She studies medieval literature through the theoretical lenses of ecocriticism and critical animal studies, placing Old French and Latin texts in conversation with theology, art history, and cultural studies. Her dissertationexplores medieval apian symbolism as a Christian legacy of Virgil and Aristotle, examining how bees were celebrated for possessing virtuous traits to a greater extent than humans: perfect social order, selfless love of others, and the production of the quasi-divine materials, wax and honey. Emily has nearly a decade of experience teaching French language and literature at the university level. She holds a BA in French, English, and Gender Studies from Calvin University (2011, dual honors) and an MA in French Literature from Indiana University (2014). Her dissertation research was awarded both a Chateaubriand and a Georges Lurcy Fellowship. She lives in New York City.

Nicholas Sooy is a PhD candidate in Philosophy at Fordham University in New York. He studies the philosophy of economics, philosophical logic, and social and political philosophy in the tradition of the Philosophy, Politics and Economics subfield. His dissertation presents several new results in game theory and interactive epistemology and applies these to large group social behavior. He has taught courses in contemporary epistemology, philosophical ethics, and introductory courses in philosophy. He received a BA in Philosophy and Peace and Conflict Studies from Messiah University (2012, summa cum laude). He lives with his wife in New York City, where together they publish In Communion, a yearly journal on religious peacemaking from an Eastern Orthodox perspective.

Rachel Lara van der Merwe is an assistant professor in the Centre for Media and Journalism Studies at the University of Groningen in the Netherlands. She received a PhD in Media Research and Practice from the University of Colorado Boulder, where she remains a Research Fellow at the Center for Media, Religion, and Culture. She has an MA in Cultural Studies, with a concentration in media studies, from Claremont Graduate University. Prior to graduate school, Rachel studied film/TV/radio production and completed a minor in psychology at Biola University. Rachel’s research explores the intersection of digital and screen media, national identity, ecopolitics, and coloniality—particularly within South Africa and the Global South. Her dissertation, entitled “We are not South African,” is a decolonial critique of national identity as a fundamentally broken form of mediation by which communities and individuals make sense of their belonging in the world. This project reflects her larger interest in how various processes of mediation, through technology (especially digital), language, or the body, reveal deep human anxieties over identity and belonging.

Mary Elizabeth Valesano is an Assistant Professor of Theatre at the University of Detroit Mercy. She is also the Costume Designer for the Detroit Mercy Theatre Company. She teaches Theatrical Design, Management Techniques, Theatre History, Introduction to the Theatre, and Introduction to the Arts. She has a BA in Theatre and French from Hope College and an MFA in Costume Design from Wayne State University. She lives in Ypsilanti, Michigan with her husband, Andrew, and her cat, Madge.

Douglas Henry serves at Baylor University as Associate Professor of Philosophy and Associate Dean in the Honors College.  He holds a BA in religion from Oklahoma Baptist University and an MA and PhD in philosophy from Vanderbilt University.  His work has addressed such varied writers as Plato, Boethius, John Bunyan, Iris Murdoch, Walker Percy, John Paul II, and Benedict XVI and diverse topics including allegory, divine hiddenness, doubt, freedom, hope, and love.  For a number of years he has directed a summer study abroad program, Baylor in Turkey and Greece, in which his students walk the dusty plains of Troy, sail the wine-dark seas of the Aegean, stand atop the Areopagus, and marvel at Hagia Sophia. Henry also has great interest in church-related higher education, and he has co-edited three books on the subject: Faithful Learning and the Christian Scholarly Vocation (Eerdmans, 2003), Christianity and the Soul of the University: Faith as a Foundation for Intellectual Community (Baker Academic, 2005), and The Schooled Heart: Moral Formation in American Higher Education (Baylor University Press, 2007).  At present, he is working on three book projects: Plato’s Euthyphro and the Character of Piety; Three Rival Versions of Education; and an as-yet untitled academic mystery novel.

Gretchen J. Van Dyke is an Associate Professor of Political Science at The University of Scranton, where she has taught International Relations and American Government since 1994. Following her undergraduate degree in Political Science at Trinity College, Washington, D.C. and three years working in the House of Representatives on Capitol Hill, Dr. Van Dyke completed both a MA and a PhD in Foreign Affairs at the University of Virginia. At UVA, she focused on the development of national security policy during the Kennedy Administration, within the broader context of broad theoretical questions about the national interest, presidential leadership, and foreign policy decision making.  Dr. Van Dyke teaches an array of electives in the subfields of International Relations and American Government. She has published journal articles and book chapters in the area of national security decision making as well as the pedagogy of International Relations, specifically the value of active and experiential learning as it relates to civic education, engagement, and citizenship. In 2011, Dr. Van Dyke completed the Ignatian Colleagues Program (ICP), an 18-month formation program in Ignatian spirituality and Jesuit education offered to senior administrators and faculty leaders by the Association of Jesuit Colleges and Universities. Dr. Van Dyke has served on the LFP National Network Board.

The LFP office will be closed July 4-8, and will reopen on Monday, July 11.

The Current LFP Update for May 2022 is now available. Click here.

Registration is open for the 2022 National Conference

The 2022 National Conference, Implicit Racial Bias and the Academy, will be held October 28-30 at Lipscomb University. Registration is now open. Click here for more information and to register.

Registration is open for the 2022 Workshop for Senior Administrators

The 2022 Workshop for Senior Administrators, Fostering Belonging: Renewing the Conversation about Race and Mission, will be held October 27-28 at Lipscomb University. Registration is now open. Click here for more information and to register.

We are pleased to announce a call for applications for the 2023-2025 Lilly Faculty Fellows Program for mid-career faculty leaders across all disciplines to engage the intersections of Christian thought and practice with the academic vocation. Click here for more information and to apply.

Sacred Heart University will host a regional conference on October 13-15, 2022 to celebrate the 60th anniversary of Vatican II and the University's founding. For more information including a call for papers, click here.

Announcing the winner of the 2021 LFP Book Award

We are pleased to announce that On Christian Teaching: Practicing Faith in the Classroom by David I. Smith has won the 2021 LFP Book Award. For more information and to see the five finalists, click here.